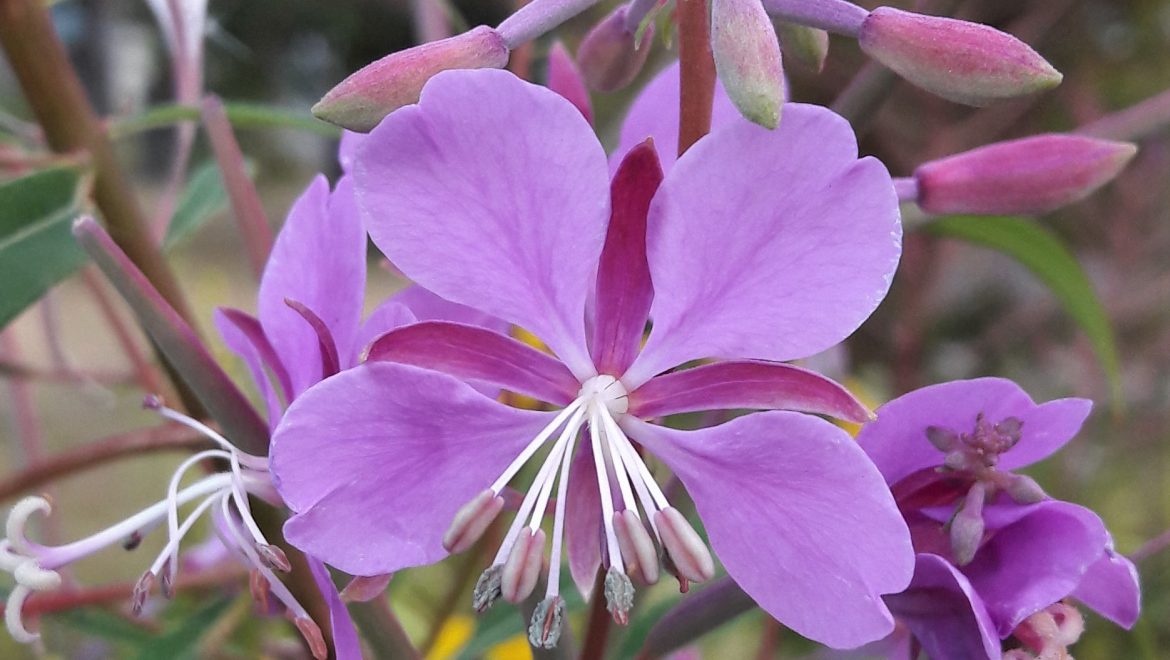 Earlier this year, I set off on a round-the-world trip, exploring the flora of three continents. I spent a couple of weeks traveling in the beautiful British Columbia (BC) – one of Canada’s provinces. Below you can read my herbal flash-back into the Canadian Summer. It is devoted largely to one plant: fireweed. The post is another monogram of our De Materia Medica Thylacini project. But before I get to fireweed, let me tell you about BC’s plants in general.

The plants of North America have more in common with the European flora than with their Australian botanical cousins. The forests and meadows of BC reminded me of the Czech landscape where I grew up. Throughout BC, the majestic conifers such as red cedar, hemlock and various species of pine proudly stand above the motley understorey. Closer to the ground, one’s sight often falls on the dirty white flowers of yarrow. And on plantain and roman chamomile, who take over many a grassy patch. If you are lucky, you can find a four-lobed leaf of red clover. The attractive yellow flowers of tansy will often catch your attention, only to repel it later by their unpleasant odour. Number of various berries, including native salmonberries, thimbleberries, huckleberries and salal berries will never leave you hungry on your forest adventures.

Another abundant species often spotted in urban gardens, river banks and on forest edges, is willow-herb, aka fireweed. Fireweed has become the floral emblem of another Canadian province (Yukon). And it has only rightly so, as you will discover in the following paragraphs.

In botanical circles, fireweed goes by Epilobium angustifolium. She is highly abundant all over Europe and North America and even some parts of Asia. This pretty plant has an abundance of small flowers arranged in long inflorescences forming the tip of the stem. Each individual flower has four pink petals and eight white stamens; together they are the most conspicuous parts of the plant. Fireweed’s Latin name “angustifolium” refers to its narrow leaves. Fireweed can grow in some of the most disturbed locations and thrives especially on recently burnt sites – hence the common name.

Fireweed has been closely connected with the lives of the Native Peoples of North America. For example, the Haida People ate young stems of fireweed in early Spring, before they became too bitter and hard later in the season. The outer stem fibres were used to make a cord [1]. The First Nations also made fireweed their medicine.

The medicinally useful parts of fireweed are its leaves (sometimes also the flowers) and their water-based infusions (”teas”) or alcoholic extracts (tinctures). The list of explored and documented medicinal uses of fireweed is fairly broad and it seems that it has been used for almost all ailments known to humanity, including treatment of various infections, urinary problems, skin conditions and headaches [2]. Possibly the least scientifically documented (although one of the most common) use of fireweed is as a remedy against anxiety and depression. Some herbalists praise fireweed even more than the famous antidepressant St John’s Wort.

Most of the scientific attention, on the contrary, was devoted to fireweed’s healing effects on benign prostatic hyperplasia (BHP) and prostatic cancer. E. angustifolium has been traditionally used for treatment of prostatic problems. However, its sister – E. parviflorum (“parviflorum” means “small flowers” in Latin) – has been more powerful in this regards. Both plants are listed in the European pharmacopoeia with a reference to treating BHP.

From a chemical perspective, fireweed is rich in tannins and polyphenols [2]. It’s most famous polyphenol is called oenothein B. Oenthein B has been found to have many healing effects (maybe a direct link to fireweed’s many a therapeutic uses?) The most researched medicinal effect of oenothein B has been the one of slowing down (inhibition) the action of 5-alpha-reductase [3]. In healthy males, this enzyme turns testosterone into a “more potent” dihydrotestosterone (DHT). However, it is theorized that when this enzyme goes mad and turns too much testosterone into DHT, troubles arise. And the troubles were named benign prostatic hyperplasia aka BHP [4]. Patients with BHP typically receive a chemical substance which slows down the over-active enzyme. This results in decrease of its concentration in blood stream and a patient’s relief [4].

So much to molecularly confirm fireweed’s traditional empirical use!