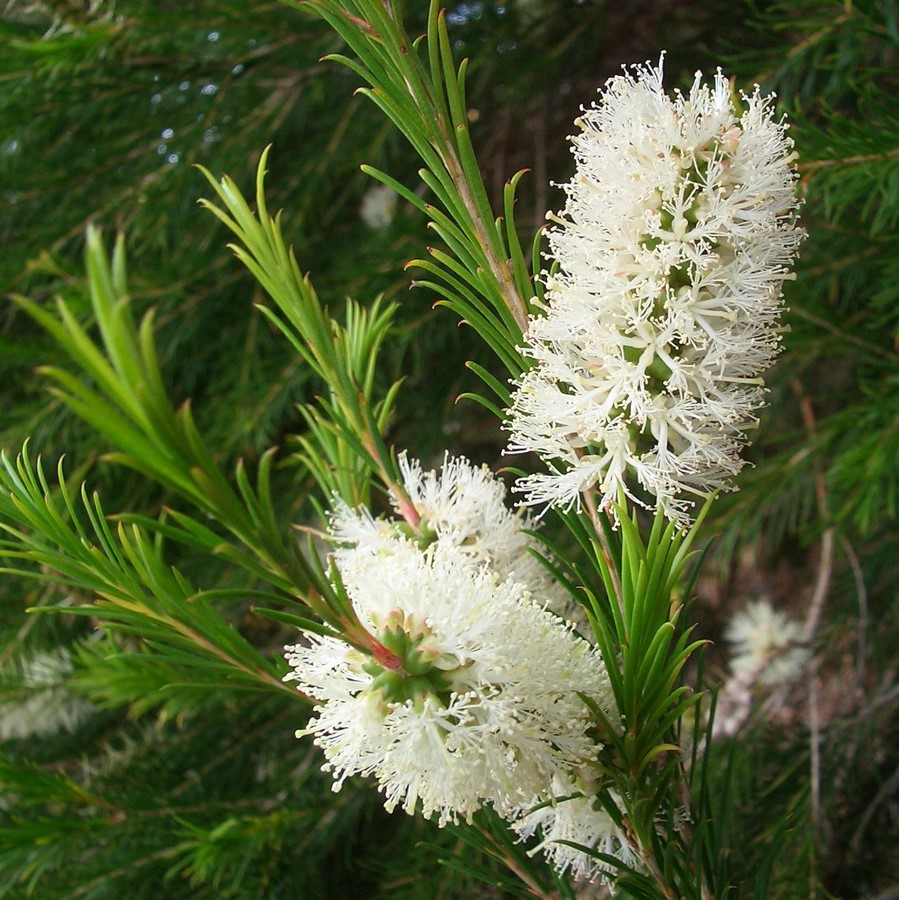 Melaleuca alternifolia (Myrtaceae): The Wonder from Down Under

Because Herbae Thylacini is based in Australia, I wanted to dedicate the second mini-review of our De Materia Medica Thylacini medicinal plants series to a medicinal plant native to this part of the world. There are not many world-known Australian medicinal plants. There is one, however, whose fame outclasses many of her European and Asian medicinal sisters: Melaleuca alternifolia. Does not ring the bell? That’s maybe because the plant’s extract is more known than the plant itself.

What’s in a name? Actually, a lot.

There are heaps of Australian plants which go by the common name “tea tree”; shrubs from the genus Leptospermum being referred to by this name the most frequently. Although they too are called tea trees, shrubs of the genus Melaleuca are more commonly known as “paperbarks”, “honeymyrtles” or “bottlebrushes”. It is perhaps of some confusion then that the famous tee tree oil comes from a Melaleuca shrub: Melaleuca alternifolia.

This plant from the Myrtaceae family is native to southeast Queensland and New South Wales. And it is its essential oil (steam distilled from the leaves and terminal branchlets) that is known as the tea tree oil (TTO). TTO has antibacterial, antiviral, antifungal, antiseptic and anti-inflammatory properties. It is indicated for the treatment of superficial wounds and insect bites, acne, athlete’s foot and other fungal infections (e.g. of toenails). Other common uses include prevention and treatment of early stages of sore lips and insect repelling. TTO is typically applied undiluted to the affected areas, even though various ratios of dilution in a carrier oil or water have been reported and are recommended. It is for external use only!

The healing properties of TTO have been for long known to Aboriginal Australians, namely to Bundjalung people of New South Wales. They used TTO just like we do today. On top of that, they applied crushed leaves of M. alternifolia formed into a paste on boils, cuts and skin abrasions to help their healing.

The Australian Aboriginals did not need to know the chemical composition of TTO to make the most of its medicinal properties. Today we know that TTO contains a number of small volatile organic compounds (as all essential oils do). And we also know that the main component bearing the medicinal properties TTO is terpinen-4-ol. However, several tens of other compounds have been identified in TTO (e.g. 1,8-cineole, α-terpinene, α-terpineol, p-cymene, and α-pinene).

Because the composition of TTO vastly differs (based on where the plants grow), an international standard stating the maximum and minimum amounts of individual compounds of TTO has been set. To be deemed medicinal, TTO must contain at least 30 % of terpinen-4-ol and no more than 15 % of 1,8-cineol.

As with many essential oils, TTO can cause mild to severe skin irritation depending on one’s sensitivity. Fresh TTO is a mild sensitizer but the risk of skin irritation increases with oxidation of the oil. For a long time it was 1,8-cineol, which was blamed for the skin irritating properties. However, as other skin-irritating compounds present in TTO (such as ascaridole and limonene [1]) were identified, these accusations hold no longer true. Nevertheless, since the amount of terpinen-4-ol and 1,8-cineol in TTO is disproportional, the content of the latter is kept low so as to ensure higher content of the active ingredient [2].