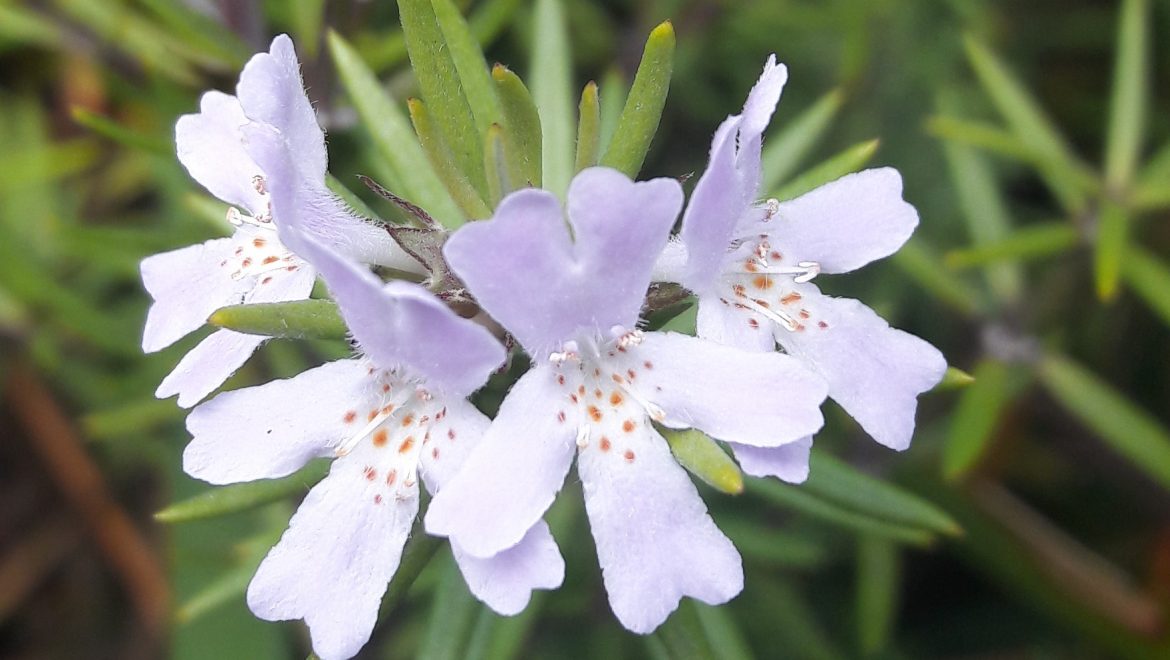 I have captured these beautiful lilac flowers during my morning run on Bruny Island. They belong to Westringia brevifolia (var. raleighii). This plant grows on the property that surrounds our house. Rather than growing wild, however, she has been planted there by the house owners some years ago. Westringia brevifolia is commonly known as coastal or shortleaf westringia. She belongs to the mint family (Lamiaceae).

She is a coastal shrub and grows as a dense bush to be circa meter and a half in both, its height and breadth. Her leaves are densely haired with their margins rolled downwards. Each of her flowers sits in a pale green cup (calyx) with long saw-like margins. The flowers are usually grouped in four. Westringia brevifolia is quite a popular garden plant and her seedlings can be purchased throughout various Tasmanian plant nurseries.

Although she conspicuously reminds of rosemary (another “mint-like” plant), the difference between the two plants becomes apparent when you rub westringia’s leaves in between your fingers. Instead of the known rosemary-like spicy odour you won’t smell hardly anything at all. Indeed, Westringia brevifolia seems to emit no aromatic compounds we could smell. Neither is she considered edible.

As another contrary to the world-known Mediterranean culinary herb, Westringia brevifolia (var. raleighii) is endemic to Tasmania. It means she does not grow anywhere else in the world but in Tassie. She is also listed as a threatened species.

The genus Westringia was named after Johan Petrus Westring (1753-1833), a Swedish botanist who was working as a physician of the King of Sweden. Other westringias growing throughout Australia include: W. fruticosa (native rosemary), W. viminalis, W. rigida, W. angustifolia and W. rubiefolia (this one also holds an endemic status in Tasmania). I have not come across any mentions of traditional medicinal use of westringias. The only research reference describes isolation of cinnamate esters from the former two species [1].