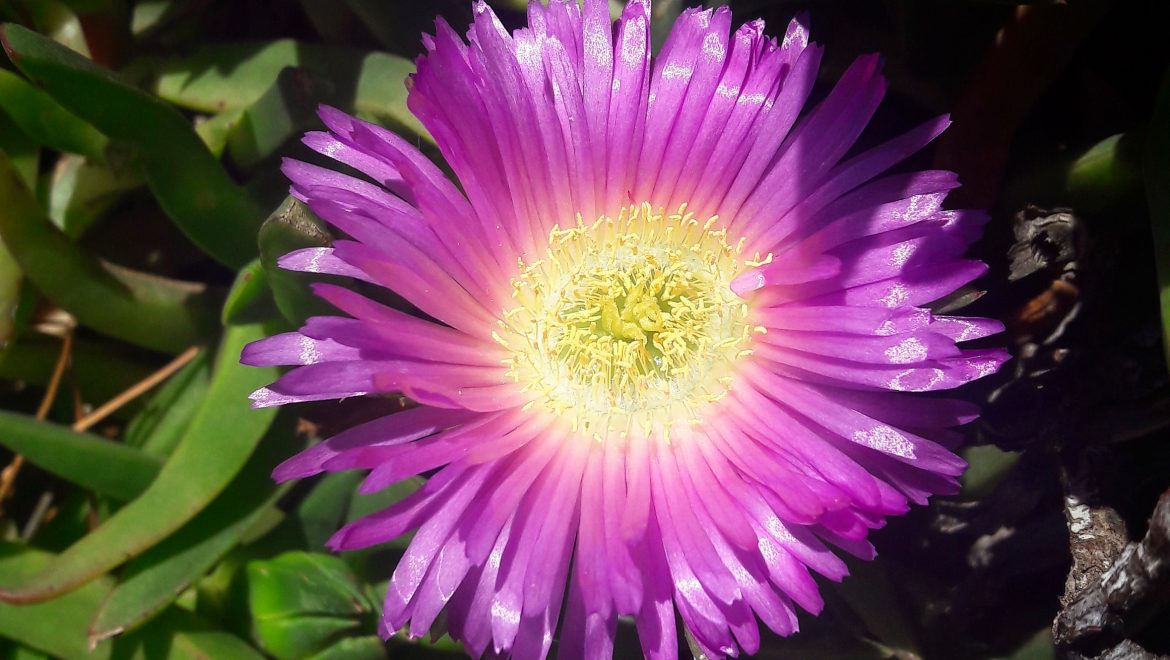 I have been meaning to write up a post about native pigface for a long time. Most Australians will be familiar with this plant because it is abundant all over the country (especially in the South). Less of you will know that native pigface is edible. And I bet only a few people have heard that native pigface has a medicinal potential. Read on to find out more about this versatile succulent.

What’s in a name

The genus Carpobrotus belongs to the botanical family of Aizoaceae. This seemingly tongue-breaking name is derived from a Greek word “aezoon” which means “ever-living”. The name reflects that plants of this family are succulents. They keep water supplies in their thick leaves and that enables them to thrive in salty coastal areas.

Meanwhile, the Latin name of Carpobrotus is a combination of two Greek words: “carpos”, meaning “fruit”, and “brotos”, meaning “edible”. The name points out a deliciously tasting fig-like fruit (more on this later). Plants of the genus Carpobrotus are commonly known as pigface or iceplant (in New Zealand). They are also called noon-flowers because their flowers fully open by midday. The Aboriginal Tasmanians call pigface kanikung (also spelt canajong).

Sisters and cousins of native pigface

Carpobrotus rossii is not named after its pink flowers, as it may seem, but after a 19th century botanist William Ross. He described this plant and collected the first specimen. Of the three Carpobrotus species present in Tasmania (C. aequilaterus, C. edulis, C. rossii) only the latter is native to Tassie. Therefore it is commonly referred to as native pigface.

C. edulis has yellow leaves and is thus easily distinguishable from the other two pink-flowered species. A good point of difference between C. aequilaterus and C. rossii are white bases of the pink “petals”. However, as we will see later, the two have had similar uses.

Native pigface is occassionaly confused with another plant of the Aizoaceae family – Disphyma crassifolia. A feature that will help you to tell the two apart are the leaves. Disphyma has round leaves while leaves of all Carpobrotus species are characteristically triangular in shape. If leaves are not distinguishing enough, you can’t make a mistake when looking at the fruit. Remember the name: Carpobrotus ripes into a soft edible fruit while Disphyma’s fruit is a dry capsule which will break your tooth rather then offering a tasty bush snack.

Although not giving native pigface its name, the vibrant pink flowers make it easily recognisable. In Spring and early Summer, when native pigface flowers, you can spot its pink fields on sandy dunes from afar. To do the botanical anatomy justice I should mention that the distinguishing pink parts of the flowers are not petals but infertile stamens (technically called staminoids). Fertile stamens create the creamy white core of the flowers. The leaves of native pigface are thick (as a proper succulent would have it), and triangular in cross-section with pointy tips.

Native pigface is widely spread across Tasmania and other Australian states. It prefers coastal sand dunes or rocky ground. Growing your own is not difficult since the plant is easily propagated from seed or cuttings which typically root quickly. It thrives in full sun.

Of the three edible parts of native pigface – leaves, flowers and fruit – it is the latter that is by far the most appetizing. The leaves are somewhat gummy in their texture (which does their taste certainly no favour). Baking, however, improves their taste. As documented, Victorian Aborigines consumed the salty baked leaves on the side of meat.

Contrary to the leaves, pigface’s soft fig-like fruit has been described as one of the best bush treats. Once ripe the fruit turns yellow-red. This is a good time to squeeze the raw fruit between your fingers and enjoy the pulp that oozes from the leathery skin (which will not satisfy your taste buds half as much). As aptly described by someone, the pulp tastes like savoury figs. Pigface’s fruit was a significant source of food for the Australian Aborigines and they enjoyed it from January till the end of Summer.

Native pigface as Medicine with potential

While pigface’s leaves lose to its fruit on the culinary level, they beat it hands down on the medicinal one. To be fair, however, I should mention that while very similar to Carpobrotus rossii it has been Carpobrotus aequilaterus, that has been mostly used medicinally by the Tasmanian Aborigines. The gelatinous content of pigface’s leaves has been used to alleviate stings and bites (think Aloe vera). C. aeqilaterus has also been used as purgative during abdominal complaints.

Owing to its abundancy on the Tasmanian coast, native pigface has attracted attention of local researchers. Studies into its medicinal qualities have shown that pigface’s leaves are rich in flavonoids. While flavonoids feature a common chemical core, they are a structurally rich class of compounds. As such they play different roles in plants and from medicinal point of view have a broad scope of effects o our bodies. The activities span antioxidative, anti-inflammatory and anti-carcinogenic. Typically they help keep our cardiovascular system in shape. Further research of native pigface examined to what extent do its crude extract (made from leaves) demonstrate the above mentioned activities. One study reported on the extract having a capability to decrease blood fat levels in rats [1]. In another the extract showed anti-oxidant activity [2]. Shame there has not been any follow up on these results. It would be good to see native pigface commonly contributing to our health.

One last important thing to mention: next to its culinary and medicinal qualities, native pigface is also a potent accumulator of heavy metals, specifically cadmium [3]. While this shows a promise for so called phytoremediation of soil, I would strongly advise against eating any native pigface that might potentially grow on contaminates soils. For this and other reasons (conservation) it is the best practice to grow your own – it is easy.

This article is part of our “De Materia Medica Thylacini” series.