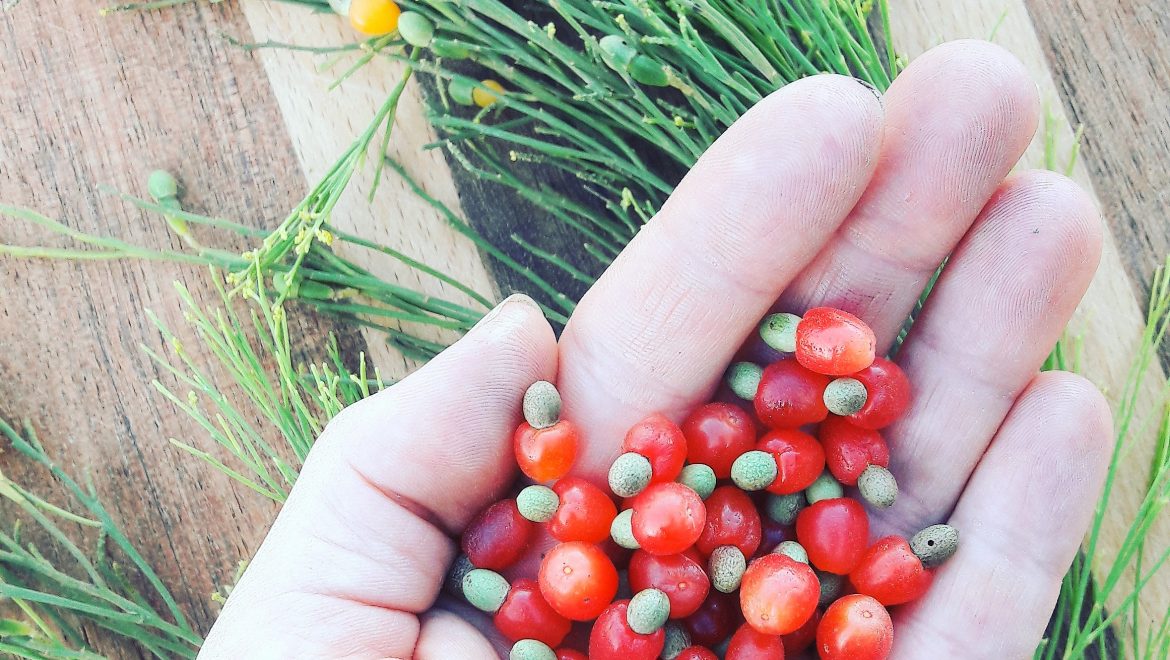 Tasmanian Summer is in full swing and that means abundance of Summer berries. Who would not love to nibble on a little bush snack? There is a number of naturalized European “berry-plants” such as blackberry or raspberry growing in Tasmania. However, there are also native berries and fruits, which can quench our thirst for wild tucker. For example, the (common) native cherry. Fruit of this curious plant is a delicious bush treat. Other parts of native cherry have been used as medicine.

Native cherry is scientifically known as Exocarpos cuppressiformis. It was named by Jacques-Julien Houtou de Labillardière, the famous French naturalist and botanist from the end of 18th century. Labillardière encountered native cherry on his first venture to Tasmania (then known as Van Diemen’s Land) in 1790s [1]. In fact, he might have been the first European to taste her fruit!

Native cherry is a small tree with bright green leaves, which are reduced to minute scales. Her flowers are tiny (only 2-5mm across). They are situated in small clusters along the branches. Usually only one of the flowers from the cluster is fertilized and matures in a fruit.

Native cherry as a mini-cashew

Native cherry’s generic name Exocarpos refers to a fruit (carpo from Greek meaning fruit) positioned on the outside (exo from Greek meaning external). The actual fruit of native cherry is not the red egg-shaped structure (as you can see in the picture), but the very hard nut situated at its apex. (The fruit of native cherry is a miniature version of cashew nuts.) After a flower is fertilized, the fruit starts to mature. During the maturation its stalk becomes fleshy, bright red and edible. Its taste reminds of candied cherries.

Native cherry does not belong to the Cypress family (Cupressaceae), as her Latin name might suggest. Neither is she grouped with the actual sour cherry in the Rosaceae family. Instead, native cherry is a member of Santalaceae family, together with the famous sandalwood trees (Santalum spp.).

There may be several traits which group the two trees in one family. One of the least obvious is their tendency to parasitism. Both sandalwood and native cherry grow as semi-parasites, sucking nutrients from roots of the surrounding plants (for example from eucalypts and acacias). For this reason, it proved to be extremely hard to grow native cherry from seed or to propagate it in any other way.

Because it is not easy to grow our own native cherry trees, we can only harvest the fruit from wild growing trees. When you do that, bear in mind, that the fruit (which is obviously harvested with the red fleshy stalk) represents the only way for the plant to reproduce. The “berries” are also fodder for birds, who might miss them, should you harvest too many. So, please, always only as much as nibble on them. Also remember, that native cherry is an excellent habitat for native birds, who nest in her dense foliage.

Australian Aborigines consumed the “berries” and used other parts of the native cherry as medicine. For example, the twigs of native cherry were used as bitter tonic and astringent [2]. The stem bark contains about 22 % tannin which is likely responsible for the astringent properties. The stems and old branches of the tree were further found to contain exocarpic acid [3].

Other Australian native cherries include: E. latifolius and E. aphyllus. Decoction of the inner bark of the former one was used by Australian Aborigines as a body wash for colds and flu [4]. A little of this liquid was also taken internally for the same purpose. Infusion of crushed fruit or inner bark was drunk by women who did not want to conceive a child [4]. Modern research discovered that E. latifolius also contains exocarpic acid. This compound was found to be responsible for the activity of the plant’s extract against Mycobacterium tuberculosis.

[4] Traditional Aboriginal Medicines of the Northern Territory of Australia, Conservation Commission of the NT, Darwin, 1993

*Disclaimer: Before you devour any wild harvested tucker, make sure that you identify the plants properly. Be careful with the harvest – do not distrurb wildlife and take only as much as you need. I do not encourage you to use the information provided in this article to treat or prevent any diseases.